What RDS is used for?

Metrics to keep an eye on them

DBLoad
is the core metric in Performance Insights. DBLoad is a measure of how many database connections are concurrently active. An active connection, also called a session in this post, is a connection that has submitted a query to the database for which the database hasn’t yet returned the results. During the period that a query is submitted and before the query results are returned, the query can be in one of several states. It is either running on the CPU, waiting for the CPU, waiting for a resource such as a lock or I/O to finish, or waiting for access to other database resources.
Non-CPU
The alert notifies us when there is more demand for CPU than CPU available. The CPU available is represented by the max vCPU line in the Performance Insights dashboard.

General Purpose SSD – General Purpose SSD, also called gp2, volumes offer cost-effective storage that is ideal for a broad range of workloads. These volumes deliver single-digit millisecond latencies and the ability to burst to 3,000 IOPS for extended periods of time. The baseline performance for these volumes is determined by the volume’s size.

Volumes below 1 TiB in size also have the ability to burst to 3,000 IOPS for extended periods of time. Burst is not relevant for volumes above 1 TiB. Instance I/O credit balance determines burst performance. For more information about the instance, I/O credits see I/O Credits and Burst Performance.

Many workloads never deplete the burst balance, making General Purpose SSD an ideal storage choice for many workloads. However, some workloads can exhaust the 3000 IOPS burst storage credit balance, so you should plan your storage capacity to meet the needs of your workloads.

What happens when we modify the storage

Auto Minor Version Upgrade is a feature that you can enable to have your database automatically upgraded when a new minor database engine version is available.

For both minor and major version upgrades, the system takes the following steps during the upgrade process for MySQL and MariaDB for Amazon RDS:

The main difference between the process for a minor version upgrade and a major version upgrade is the use of the mysql_upgrade program. This program checks all tables (both system and user) on the database. Depending on the state of a table, the program might need to physically recreate the table to conform to the new version. In most cases, no physical changes are needed and mysql_upgrade merely updates metadata in the table to indicate that the table has been upgraded.

In the case of a minor version upgrade, these table checks are usually trivial. The entire process usually takes only a few seconds to a few minutes depending on the number of tables. However, a major version upgrade can require more extensive changes to tables, as discussed later.

One other caveat about upgrade downtime is how Multi-AZ fits into the picture. One common fallacy is that Multi-AZ configurations prevents downtime during an upgrade. We do recommend that you use Multi-AZ for high availability, because it can prevent extended downtime due to hardware failure or a network outage. However, in the case of a MySQL or MariaDB engine upgrade, Multi-AZ doesn’t eliminate downtime. The slow shutdown and the physical changes made on the active server by the mysql_upgrade program require this downtime.

There are two different types of Backups of AWS. Automated Backup and Database snapshots.

Automated backups allow you to recover your database to any point in time within a “retention period”. The retention period can be between one and 35 days. Automated backups will take a full daily snapshot and will also store transaction logs throughout the day. When you do a recovery, AWS will first choose the most recent daily backup, and then apply transaction logs relevant to that day. This allows you to do a point in time recovery down to a second, within the retention period.
Automated backups are enabled by default. You get free storage equal the size of your database. Backups are taken within a defined window. During the backup window, storage I/O maybe be suspended while your data is being backed up and you may experience elevated latency.

Are done manually, they are stored even after you delete the original RDS, unlike automated backups.
Whenever you restore, snapshot or backup, the restored version will be a new RDS with a new endpoint.

IO suspension doesn’t happen for Multi-AZ. From AWS RDS user guide “During the automatic backup window, storage I/O might be briefly suspended while the backup process initializes (typically under a few seconds) and you might experience a brief period of elevated latency. No I/O suspension occurs for Multi-AZ DB deployments because the backup is taken from the standby.”

Amazon RDS encrypted DB instances use the industry-standard AES-256 encryption algorithm to encrypt your data on the server that hosts your Amazon RDS DB instances. After your data is encrypted, Amazon RDS handles authentication of access and decryption of your data transparently with a minimal impact on performance. You don’t need to modify your database client applications to use encryption.

Compute Node Hours (total number of hours you can run across all your nodes. Billed for 1 unit per node per hour. No charged for leader node hours, just compute)
Backup
Data Transfer(only within a VPC)
By default takes care of key management
your own keys through HSM
AWS Key Management Service
1 Zone availability
Can restore snapshots to news AZs in the event of an outage.

You use these features to tightly manage the flow of data between your Amazon Redshift cluster and other resources. When you use Enhanced VPC Routing to route traffic through your VPC, you can also use VPC flow logs to monitor COPY and UNLOAD traffic. If Enhanced VPC Routing is not enabled, Amazon Redshift routes traffic through the Internet, including traffic to other services within the AWS network.

In case of a problem with master aurora,  you’ll failover automatically to your Aurora Replica.
Failover is automatically handled by Amazon Aurora so that your applications can resume database operations as quickly as possible without manual administrative intervention.
If you have an Amazon Aurora Replica in the same or a different Availability Zone, when failing over, Amazon Aurora flips the canonical name record (CNAME) for your DB Instance to point at the healthy replica, which in turn is promoted to become the new primary. Start-to-finish, failover typically completes within 30 seconds.
If you do not have an Amazon Aurora Replica (i.e. single instance), Aurora will first attempt to create a new DB Instance in the same Availability Zone as the original instance. If unable to do so, Aurora will attempt to create a new DB Instance in a different Availability Zone. From start to finish, failover typically completes in under 15 minutes.
Aurora relays in a virtual machine located in one availability zone, for example, eu-west-1c, if something fails you will have to failover to some Aurora replica.
The cluster DNS failover of the cluster endpoint is automatic.

Imagine a scenario where there is a requirement to optimize your database workloads in your cluster where you have to direct the write operations of the production traffic to your high-capacity instances and point the reporting queries sent by your internal staff to the low-capacity instances. How do you achieve that? With custom endpoints. 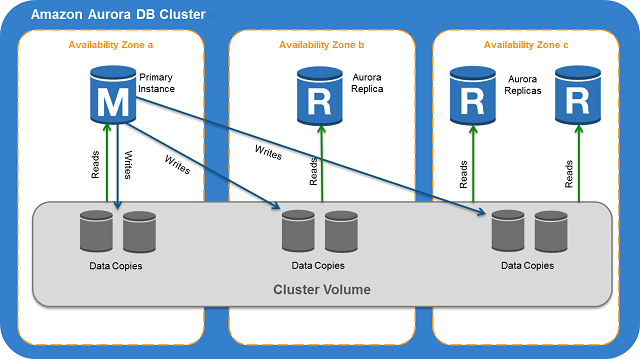 By using an Amazon Aurora global database, you can have a single Aurora database that spans multiple AWS Regions to support your globally distributed applications.

You can also change the configuration of your Aurora global database while it’s running to support various use cases. For example, you might want the read/write capabilities to move from one Region to another, say, in different time zones, to ‘follow the sun.’ Or, you might need to respond to an outage in one Region. With Aurora global database, you can promote one of the secondary Regions to the primary role to take full read/write workloads in under a minute.

WS Database Migration Service can migrate your data to and from most of the widely used commercial and open source databases. It supports homogeneous migrations such as Oracle to Oracle, as well as heterogeneous migrations between different database platforms, such as Oracle to Amazon Aurora. Migrations can be from on-premises databases to Amazon RDS or Amazon EC2, databases running on EC2 to RDS, or vice versa, as well as from one RDS database to another RDS database. It can also move data between SQL, NoSQL, and text based targets
In heterogeneous database migrations the source and target databases engines are different, like in the case of Oracle to Amazon Aurora, Oracle to PostgreSQL, or Microsoft SQL Server to MySQL migrations. In this case, the schema structure, data types, and database code of source and target databases can be quite different, requiring a schema and code transformation before the data migration starts. That makes heterogeneous migrations a two step process
First use the AWS Schema Conversion Tool to convert the source schema and code to match that of the target database, and then use the AWS Database Migration Service to migrate data from the source database to the target database. All the required data type conversions will automatically be done by the AWS Database Migration Service during the migration. The source database can be located in your own premises outside of AWS, running on an Amazon EC2 instance, or it can be an Amazon RDS database. The target can be a database in Amazon EC2 or Amazon RDS.

AWS Database Migration Service can migrate your data to and from most of the widely used commercial and open source databases. It supports homogeneous migrations such as Oracle to Oracle, as well as heterogeneous migrations between different database platforms, such as Oracle to Amazon Aurora. Migrations can be from on-premises databases to Amazon RDS or Amazon EC2, databases running on EC2 to RDS, or vice versa, as well as from one RDS database to another RDS database. It can also move data between SQL, NoSQL, and text-based targets.